Our Emilian Tortelli The tortelli one is a recipe that embraces different parts of the Emilian territory. A type of pasta characterized by tasty fillings, always capable of enhancing seasonal raw materials to create irresistible combinations to accompany with a bed of melted butter and a generous sprinkling of Parmesan cheese. United in the sign of […] 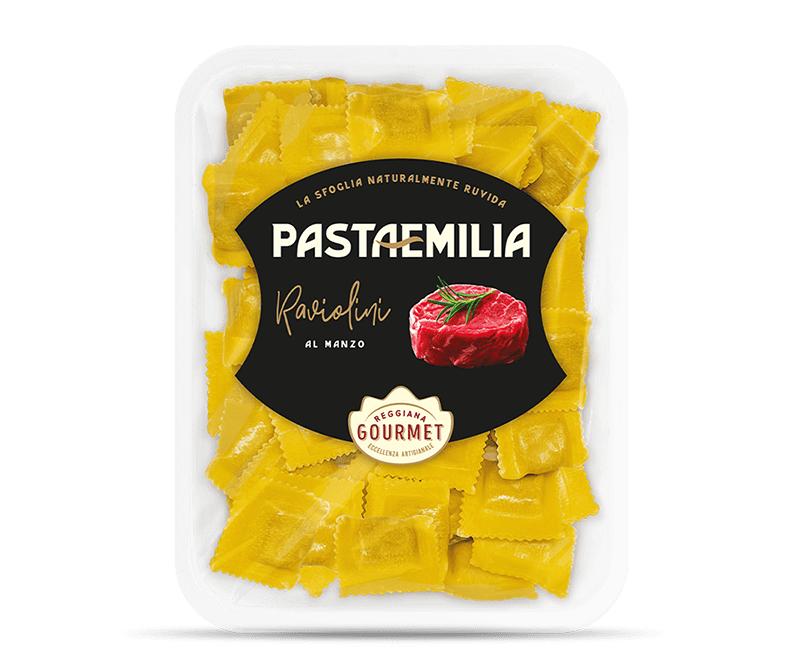 Mezzelune: The full taste of pasta Mezzelune is a dish with an unmistakeable shape that is found all over the country. A thin disc of pasta which folded on itself makes half-moons, stuffed with a fish, meat or vegetable filling and served with a myriad different sauces. As good as the first time The flavour […]

Tortelloni: Soft and tasty Tortelloni is a filled egg pasta similar to tortellini but with an abundant filling of vegetables, meat or cheese. All over Emilia and beyond, Tortelloni are the protagonists of delicious recipes that are all incredibly delicious. a filling THIS BIG, WHICH BRINGS A SMILE TO YOUR MEALS With ricotta and spinach […]

Ravioli: the shape for so many fillings Ravioli is one of the most classic dishes in the world of Italian filled pasta. Its typically square shape holds, within a thin layer of pasta, numerous fillings and seasonings: whether based on meat, fish or vegetables. An explosion of flavour to serve the year round, in broth […]

Pumpkin Tortelli:an explosion of sweetness Pumpkin Tortelli, with its unmistakeable flavour, is the ultimate autumn recipe. Born from the sweetness of pumpkins and artfully combined with the aromas of the typical fresh products of local areas, they have long been delighting Italian tables. Served with butter, sage and a generous helping of Parmesan cheese, this […]

Ricotta and Swiss chard Tortelli: Irresistible and so creamy Closely tied to Parma’s history and tradition, Ricotta and Swiss Chard Tortelli is a dish created for celebrations. The filling, where the creaminess of ricotta prevails over the freshness of Swiss chard, make a dish suitable for everyone but with a unique taste. A winning dish […]

Swiss chard Tortelli green heart of Emilia “Green tortelli” is a traditional festive dish of the Reggio Emilia area. Its typically square shape encloses a creamy filling of spinach and Swiss chard mixed with cheese and ricotta, which gives it its unmistakeable fresh flavour. A recipe created to celebrate festivities but perfect for sharing on […]

At the table, in the street, anywhere you want A dish suspended between history and legend, which brings together the aromas and values of the Emilian countryside in an unmistakeable shape that tastes of home. Tortellini have always been the undisputed protagonists of family Sunday lunches in Bologna. A captivating recipe, refined over centuries, that […]

Reggiana Gourmet SRL
Via Ferraris, 3
42011 Bagnolo in Piano (RE)

Sale Hours Reggiana Gourmet
Via Pacinotti 1, Bagnolo in Piano (RE)

Please fill out the following form and we will be in touch as soon as possible.

Do you want to receive our Catalogue?

Please fill out the following form and we will be in touch as soon as possible.